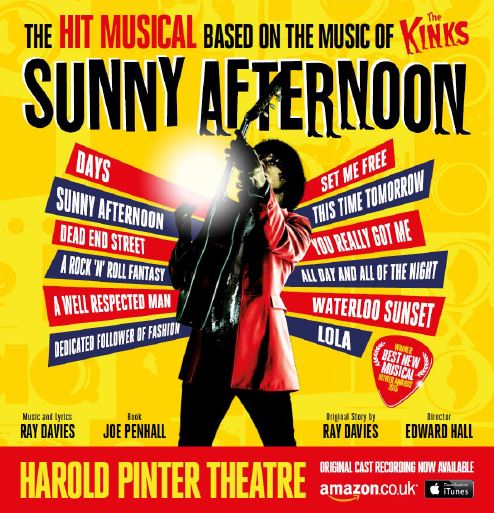 Extended due to phenomenal demand, SUNNY AFTERNOON is now booking to 29 October 2016.

Winner of the 2015 Olivier Award for BEST NEW MUSICAL, with Music and Lyrics by Ray Davies (Olivier Award for Outstanding Achievement in Music), a new Book by Joe Penhall and Direction by Edward Hall, SUNNY AFTERNOON depicts the rise to stardom of THE KINKS.

Set against the back-drop of a Britain caught mid-swing between the conservative 50s and riotous 60s, this production explores the euphoric highs and agonising lows of one of Britain’s most iconic bands and the irresistible music that influenced generations.

THE KINKS exploded onto the 60s music scene with a raw, energetic new sound that rocked a nation. But how did that happen, where exactly did they come from and what happened next?

This ‘exhilarating, hugely enjoyable new musical’ (Financial Times) features many of the bands hits, including: YOU REALLY GOT ME, WATERLOO SUNSET, DEDICATED FOLLOWER OF FASHION, ALL DAY AND ALL OF THE NIGHT, LOLA, SUNNY AFTERNOON and many more.

ONE OF THE MOST INFLUENTIAL BANDS OF THE 1960S BRITISH INVASION, THE KINKS PAVED THE WAY FOR THE NEXT DECADE’S HARD ROCK.