Barry Diller and Sonia Friedman today announce the extension of the critically acclaimed West End production of Harper Lee’s To Kill a Mockingbird – a new play by Aaron Sorkin – with the production now running at the Gielgud Theatre until 19 November, 2022. 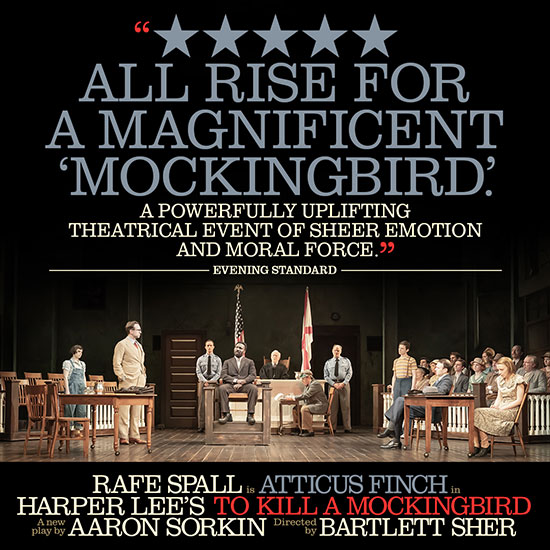 To Kill a Mockingbird is running the All Rise ticket scheme in an exclusive partnership with TodayTix, offering £15 seats for every performance across the run. The initiative provides access at affordable prices to as wide an audience as possible. More than 1,400 tickets will be released each month. So far more than 2,000 tickets have been sold via the scheme with a further 10,000 being made available through to November starting from next week. In addition to the All Rise initiative, there is an opportunity to purchase £15 tickets via Today Tix daily rush – where a limited number of additional seats will be available on each performance day via the app. The TodayTix app can be downloaded onto iOs or Android devices for free via the app store; or you can access online via TodayTix.com.

Set in Maycomb, Alabama in 1934, To Kill a Mockingbird has provided American literature with some of its most indelible characters: lawyer Atticus Finch, the tragically wronged Tom Robinson, Atticus’ daughter Scout, her brother Jem, their housekeeper and caretaker Calpurnia and the reclusive Arthur “Boo” Radley. For the past six decades and for every generation, this story, its characters and portrait of small-town America have helped to, and continue to, inspire conversation and change.

Harper Lee’s enduring story of racial injustice and childhood innocence has sold more than 45 million copies of the novel worldwide. 2020 marked the 60th anniversary of its publication.